Augustine was born in a farmyard just outside the town of Tagaste in North Africa on 13th November 354 AD. His father, Patricius, being a magistrate was a busy man and his mother Monica, for whom he had a deep love and regard was a saintly woman. From a very young age, Augustine was sharp-witted and intelligent and often used this faculty in playing pranks at school.

Gradually he became sober and very often lost in thought. In 383 AD Augustine went to Milan and was appointed Professor at the Imperial College and finally converted to Christianity on April 24, 387 AD. After his mother’s death, he returned to Tagaste, set up a monastery and started preaching and spreading God’s Holy message. 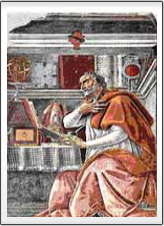 He wrote many books. Soon, his name was known throughout the Roman Empire. In 391 A.D. he was invited to a pleasant port – town on the Mediterranean known as Hippo, to preach to the people. In Hippo, Augustine’s speech had such an impact on the people that the large crowd cheered and acclaimed him as assistant to the old Bishop Valerius. Augustine had to yield to the Bishop’s and the people’s demands and had begun to work with an unmistakable zeal and love for the people of Hippo. Augustine spent long hours in solitude and prayer. After years of hardship and penance, Augustine was a changed man. After the death of Bishop Valerius in 395 A.D Augustine was consecrated the Bishop of Hippo by His Holiness, the Pope.

For thirty – five years after that, Bishop Augustine spent busy and eventful years serving his beloved people and spreading God’s Holy message. After long years of mortification, penance and fervent prayer, on August 28, 430 A.D. Bishop Augustine passed away in a quiet and dignified death, as his dear mother St. Monica had died years ago. Bishop Augustine had not died; he had merely gone to join the Communion of Saints. Ages later, Bishop Augustine was canonized as a Saint of the Catholic Church.