St. Augustine’s Day School, was the brain child of Mrs.Edna Gasper (nee Graham) who after interaction with the members of the Anglo-Indian Community and other communities found the need to set up an English medium co-education school in the vicinity of central Kolkata. She envisaged a new generation of children fortified with sound values, well equipped to meet the challenges of the new era. Keeping this in mind, she took a premisein the year 1968 at 43, Ripon Street,Kolkata.

After one and half years of initial infrastructure and other required formalities needed the school was founded on the 15th November, 1970. Thereafter, in a most humble way, the torch of education was passed on from Ms. Edna Gasper to Mr. C.R. Gasper. From January 1971, classes began with Mr. C.R. Gasper as the Principal of the school.

The founder body started our school at Shyamnagar on Ghospara Road in 1975 and Barrackpore in the oldest cantonment area in the year 1985 with Mr. C.R.Gasper as the Rector.

The school has been named after Saint Augustine, the great scholar of the Roman Catholic Church. The intent was to promote and disseminate knowledge for the development of the Anglo-Indian community as well as the other communities sharing the common desire for education in English medium based on National and Catholic ethos. 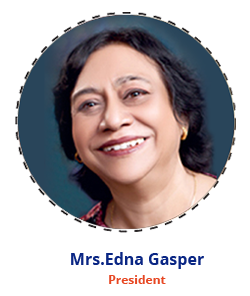